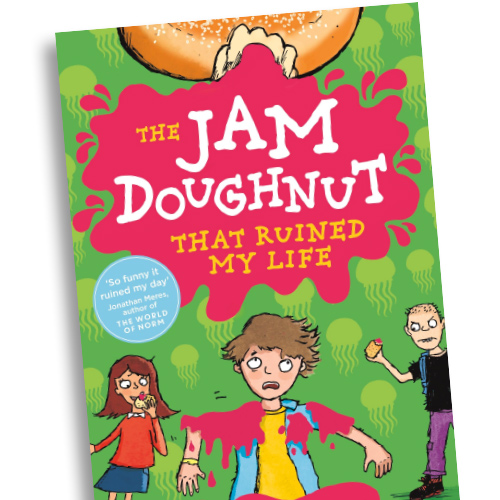 So my new book, The Jam Doughnut That Ruined My Life, was released recently. It’s all about, well, this jam doughnut that ruins someone’s life. It’s not such a clever title but it’s really good fun, I promise. Anyway, it’s available at all good bookshops NOW!

Ever since I started talking about the book, people have been asking me, “What made you write about doughnuts?”

I guess I thought it’d be a laugh to write about something seemingly harmless causing total catastrophe in someone’s life. Originally I was thinking about Swiss rolls but then I switched it to jammy doughnuts and it seemed to work better. I’ve been toying with the idea of writing about a kind of butterfly effect for a while (you know what I mean – a butterfly farts in Japan, causing a kangaroo to be crushed under a giant piece of cheese 3000 miles away) but on a much smaller, more domestic scale.

In my book, Roman is a slightly-grumpy, doughnut-obsessed little fellow. All he wants to do is eat his favourite snack during a school trip to an aquarium. Unfortunately for him, this simple desire sets in motion a chain of disasters, which include going out with a doughnut-digger girlfriend, becoming friends with the school nutter, being kidnapped by armed robbers, causing a mutinous riot at an old people’s tea party and shaving a prize-winning guinea pig. I had a real laugh writing it and I hope it comes out in the book. There are some terrific illustrations in there from Hannah Shaw as well.

Another question people have asked me when I’ve told them about the book is, “Do you like doughnuts?” The answer is an absolute YES so I’m not sure why I’ve given doughnuts such a bad rap in this book. Maybe I thought they’ve had it too easy for too long…

Other people have been telling me about how doughnuts are changing, with all kinds of new-fandangled, messed-up flavours – lime and herb, pilchard and cranberry, shoe and vomit etc. I’m an old-fashioned kind of guy though and I don’t much like change – raspberry jam or nothing I’m afraid. That’s one thing I’ve got in common with Roman in the book, who won’t even entertain the idea of a lemon crud – sorry curd – flavoured one.

By the way, I’ve just finished the second draft of the sequel, which is called The Chicken Nugget Ambush (out in 2016). Chicken nuggets – now they do deserve some serious bad treatment!