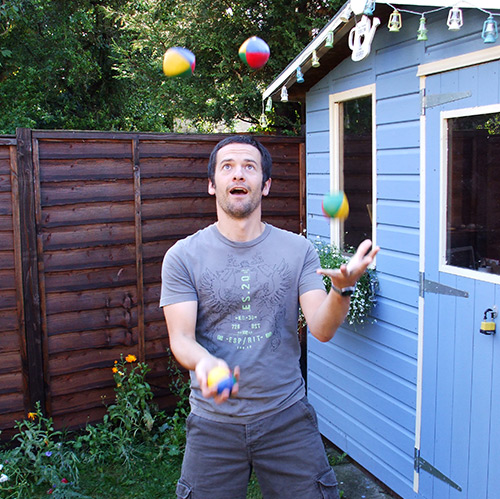 Being a Man Child

Roald Dahl was once asked how he was able to relate to seven year olds so well. He replied, “Because I am seven years old!” I love this answer, mainly because he was pushing seventy at the time. I’m not sure how many seven year old’s share the great man’s love of whisky, cigarettes and casinos but still – what a brilliant sentiment.

When you write for kids (particularly when you’re writing in the first person) I guess you’ve got to spend a lot of your time dusting off old, forgotten corners of your brain and trying to think like you used to. Being an immature, silly excuse for a grown-up definitely helps you to do this.

We’re slap bang in the era of the man-child right now. Eighty years ago we’d have been force-fed Woodbines and shoved down a mine at eleven. Nowadays you don’t feel like a proper grown-up til you’re sitting in an old people’s home and sucking rich teas through a straw. The world’s full of middle aged blokes playing computer games, reading comics and dressing up in nappies.

Personally I think it’s great – why not have some fun in your life? Being an adult is rubbish – taking out the bins, filling in forms, talking about mortgages when you go to parties, sending Angry Letters, shouting at the telly like Leon from Gogglebox etc. People (mainly men it has to be said) have clocked on that this seems utterly miserable. Kids have way more fun. You might as well do silly stuff. My friend’s dad was a mascot at Preston North End on his 50th birthday. Brilliant! Imagine being one of the players – you’d have thought Benjamin Button had just won a competition.

That said, I do sometimes wonder if it’s healthy though…

I mean, when does being a fun, cheeky fellow with child-like exuberance actually just become, well, a little bit sad and embarrassing?

For example, I run a kids football team. Getting involved, cheering them on, having a bit of banter with them – good. Turning up in my kit like John Terry and slide-tackling a ten-year old while he takes a throw-in – not so good.

Liking chicken nuggets chips and beans – nothing wrong with that. Ordering them in a posh restaurant, mixing them all together in a glass and flinging them at a waiter – probably a bit much.

Playing about at a soft play centre with my children – lovely. Dominating the ball pit then urinating all over the plastic balls – terrible.

See – it’s a mine-field. Maybe as a society, people have got to be a bit more forgiving of man-children though. Instead of dismissing us as pathetic, insecure losers when we get things a bit wrong, people should treat us like children. Make us say sorry, give us a kiss and then make us promise never to be naughty again.